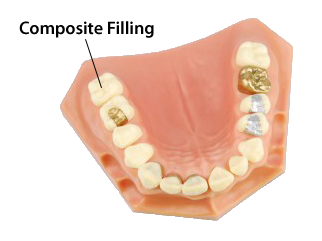 What are the Benefits of White Fillings?

In comparison to silver amalgam fillings, white fillings tend to be more durable as they form a stronger bond on the existing structure of the tooth. The composite material these filling are comprised of also helps prevent future tooth damage and can withstand high temperatures. In addition, composites can be used by dentists to fix very small cavities. Instead of having to replace a large portion of the tooth as is often necessary with silver amalgams, white fillings can be used in conjunction with a smaller surface area on the tooth.

The main benefit to this is that the smaller impression will last much longer, as a larger portion of the tooth will be salvaged. Also, in contrast to gold or silver amalgams, composites can be used safely with laser preparation technology. The latter is often used by dentists to perform more precise work and prevents them from having to use shots or drilling when filling the cavity. Lastly, composites (white fillings) are much easier to work with when needing to be fixed. Instead of having to replace the entire piece, as is the case with gold or silver amalgams, only the defective portion of the filling will need to be attended to.

Given the many benefits white fillings have over traditional silver amalgams, they tend to be more expensive. On a per tooth basis, the cost of a composite is about twice as much as an amalgam. However, most dental insurance plans will pay up to the difference. For example, if a white filling costs $150 in comparison to a $75 amalgam, the patient will only have to pay $75 out of pocket. Actual costs are going to vary, but as white fillings increase in popularity, insurance companies are likely going to cover a larger percentage of the cost.

Call Us Email Us Make Appointment

"I had an implant and three crowns on my top front teeth. I couldn't be happier. Dr. Briggs is an absolute joy and all of his staff are fantastic.

Great! Very communicative through the whole process. I love my new front teeth! From major dental replacements down to teeth cleaning, this is the best dental office I have ever had in my life."

Overall: A
Availability: A
Office Environment: A
Punctuality: A
Staff Friendliness: A
Bedside Manner: A
Communication: A
Effectiveness of Treatment: A
Billing and Administration: A